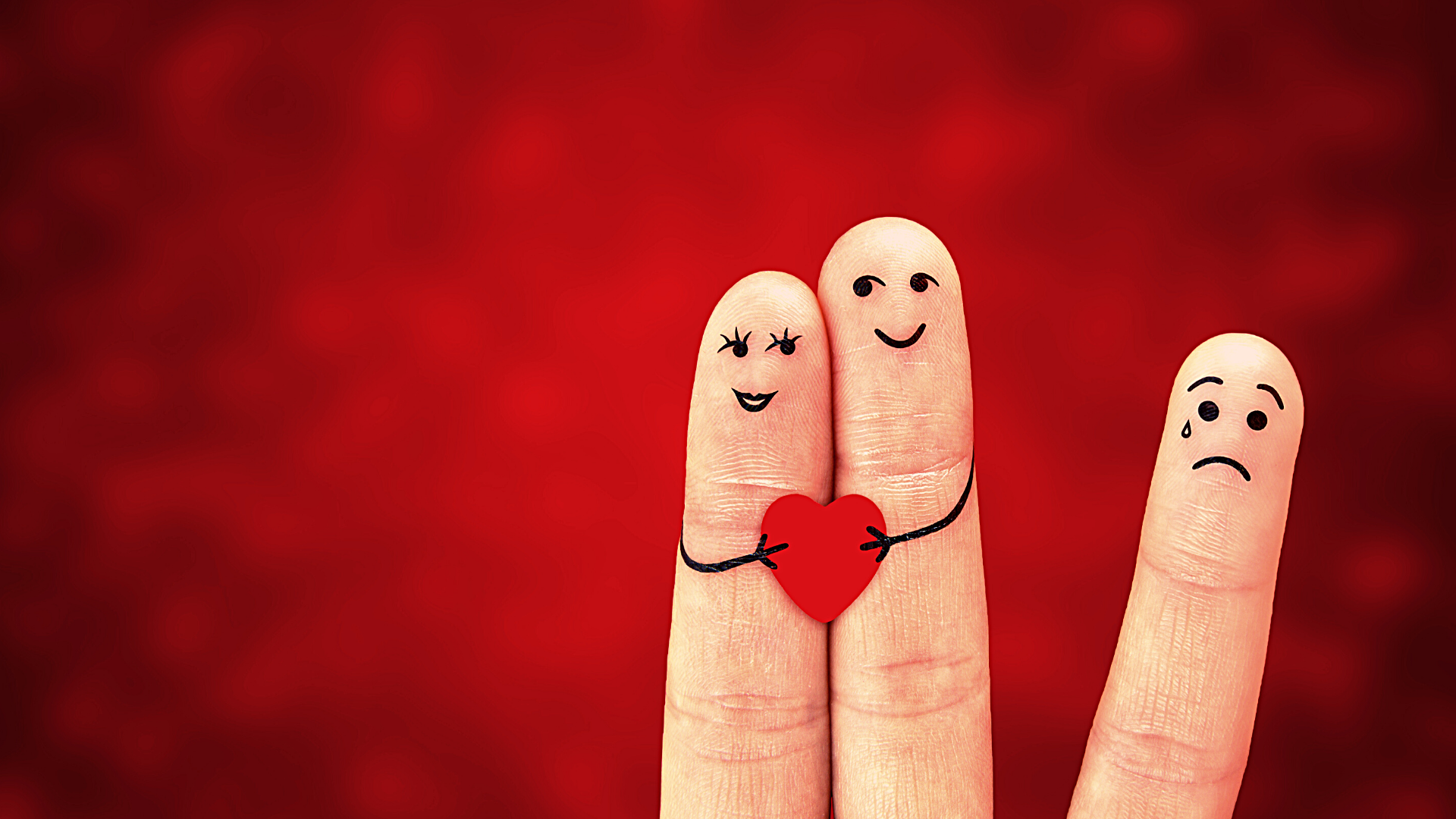 If you are in a loving relationship, there’s no such thing as “we’re just friends.” No, I am not talking about you and your significant other. I am talking about friendships you have with the opposite sex outside of your relationship with your significant other. If you disagree, don’t quit reading. Hear me out for a second. Friendships with the opposite sex is fine to a certain degree. By saying that, I mean you can have “buddies,” but never to the extent of texting one on one, private phone conversations, inside jokes, and especially driving alone together. It just doesn’t work. The moment you begin having relationships with the opposite sex beyond surface level is the moment you allow a third party in your personal relationship. No longer is it a boyfriend/girlfriend, fiancé/fiancée, husband/wife relationship. The third person becomes a stumbling block that can lead to a myriad of issues. No it’s not jealousy and no, it’s not being controlling. It’s the principle of honoring the relationship you are choosing to pursue.

I am naturally a friendly person. I grew up in a family that is no stranger to man. Growing up our home was always open. It was open to every and anyone. Whether it was family, church friends, work friends or school friends, my parents welcomed all. At times we even hosted missionary groups months on end. My parents are huge believers of being a friend to all. I took that very literally and did not realize how detrimental it could be in a loving relationship. As a female who is in a loving relationship, having a male friend outside of the one I am pursuing was not something I ever considered. Besides, I did not know all that comes with being in a committed relationship. With dating Jarrod, I had some learning to do. We both did. A lot of what I share are personal and serious learning on my part. Don’t get the wrong idea. Jarrod, my fiancé, whenever issues come up that require some learning on my end, he’s been amazing at not blowing up on me or get all crazy. He’s had some learning on his own too. We quickly had to understand that we are both learning and in that, there has to be grace. Back to the topic of having friends of the opposite sex. Let’s just say I almost allowed someone to become a third party. A place they had no right having. I bet you’re thinking wild here. Let me just give you the inside scoop.

Before Jarrod and I got engaged, in the early stage of our dating, a guy came along that needed help with his homeless ministry. Let’s call him Pete. I love helping people. And as mentioned above, I was raised to be a friend to all, so naturally I said, yes. It didn’t take long for Pete to ask for my number for “ministry purposes.” Texts quickly turned into phone calls. All along, Jarrod gently asked me to be very careful. Naturally, I thought Jarrod was being jealous and paranoid. Besides, Pete and I, well – “we’re just friends.” Boy oh boy was I wrong. While our texts and phone calls were centered around the happenings in “ministry,” I started noticing they became increasingly more frequent and longer.

The tipping point was when Pete asked me to go grab lunch with him after one of our ministry meetings [one on one]. It was then Vashti’s eyes were open to the reality of what was going on. What seemed harmless in the beginning led to someone that had created ties with me I had no intentions creating. I had to admit something to myself that Jarrod had told me from the start, Pete liked me. He knew I was dating Jarrod, but that didn’t stop him. Jarrod always tells me,

People don’t care if you’re in a relationship or not. If someone likes you, they will be there and their “being there” is simply a means to take the seat of the one that’s currently occupying it.

They are waiting for their moment and they will patiently wait until you put in place boundaries and remove the means for them to wait. It starts small only to have a snowball effect. You get to choose that snowball effect. After this whole ordeal, Jarrod and I had a hard sit down conversation.

Something I thoroughly love about Jarrod is that in hard conversations, he always makes clear, he loves me. Whatever we are discussing does not remove or change the foundation of love. Let me tell you, that conversation was not easy for this non-confrontational girl. But it needed to happen. We created boundaries in a number of areas of our relationship, but one of them we did not cover was that of having friends of the opposite sex. The one thing we did cover in that aspect was never driving alone with the opposite sex outside of immediate family, but outside of that, not much. Before I get into that, I bet you’re curious to know if I grabbed lunch with Pete. I did, but clever Vashti found a way to make this one on one lunch into a whole group event. We all carpooled and I made sure to take the backseat as to not be paired up next to Pete. On the way to lunch I humbly texted Jarrod, “You were right. I am so sorry!”

Two people cannot simply be friends. One will always end up growing some type of feeling for the other. Don’t believe me? Ask someone who’s been through some type of infidelity. I have no place speaking for friends and family who I’ve witness having gone through a separation or divorce. That’s their story to tell, but what I will say is, the common denominator is one party thinking “we’re just friends” which led to emotional and physical cheating. Jarrod was gracious with me. Sometimes I think he is a little to gracious as I am learning the ways around being in a loving relationship. You can say I grew up a tad bit sheltered. What I viewed as a harmless friendship, was an entry way for something that could have ruined the trust built between Jarrod and I.

So what did Jarrod and I agree on? In our conversation I found out something eye opening. Other than his female family members, Jarrod doesn’t text any other females. On occasions, if it’s to surprise me then he’ll text my sister in laws and my closest friends. Outside of that, Jarrod firmly believes he has no place texting any other female. To say I felt pretty crappy is an understatement. He didn’t tell me that to make me feel bad about myself. Jarrod shared his heart to make clear his priorities and his top was to honor God and then me. His way of honoring me was never creating a space that I would lose his trust.

Now don’t get the wrong idea about me here. It’s not like I have boys on end texting me. That’s not it at all, but the ones that did have my contact information, I had to put a firm line between me and them. Currently, I work with mostly men. Married and unmarried, and to protect all hearts I’ve implemented Jarrods example of honoring me. If it’s not work related, there’s no place for texting/calling. After 5pm, if it’s not an emergency, then it can wait. My priority is first God and then Jarrod. In honoring, I had to set boundaries that will protect what’s sacred.

Here’s the thing, if you need to have friends with the opposite sex while in a committed relationship, you’re in the wrong relationship. One of my sister-in-law’s has this saying, “it’s you and your spouse against the world.” You choose to make your significant other the priority. That doesn’t begin in marriage. If you are dating just to date, that’s a whole other issue. But if you are seriously dating with the intent to marry, create healthy habits of boundaries with the opposite sex. It’s not control. It’s not trust issues. It’s not even jealousy. It’s removing any means to create distrust, dishonor, and infidelity of any sort.

I will conclude with this, some things we’ve implemented in terms of opposite sex relationships that we’ve held strong and firm on are:

Don’t create a room where emotional or physical cheating can creep in. Protect what’s sacred and always remember that it’s you and your significant other against the world. There’s no such thing as “we’re just friends.” Someone always ends up creating a tie/connectedness.

Do you have “we’re just friends” of the opposite sex that you text and call outside of your loving relationship? Has that created issues in your personal relationship? Figure out what your priority is. If you cant, then you probably shouldn’t be in a relationship.